What I did get was plenty of time to play around with everything else that happened around me, and part of that was shooting with a Holga and not really caring about all the knob-twisting and exposing and all that jazz that can occupy the mind while taking pictures. And speaking of occupies minds, I was apparently mentally on vacation, too…my Holga had gotten itself set to read the film numbers for a 16-exposure, 645 format setup, even though the camera still had its 6×6 mask in. So I was advancing the film according to 645 markings, and shooting with 6×6 equipment, which meant that everything overlaps. I don’t have individual images…I have a few long, uninterrupted strips of beachiness.

This is the kind of mistake that cannot be made on a digital camera. Actually, it can’t even be made on a decent film camera. Sure, there are double exposures, but this endless stretch of exposed film is the product of letting myself go a bit, shooting with a toy, and being okay that the result is quirky. Long live quirk.

That ball was over-bowled, and headed straight for me. When they saw me taking pictures of their game, I think they nonchalantly tried to treat me as a bowling pin. I’m too quick for that.

Since today is August 4th, I though it would be germane to write about July 4th, and when I say July 4th, I mean the whole collection of days surrounding it, including the 7th, which is when this image was taken on Bird Island in North Carolina. It’s the southern most barrier island on the NC coast, and a good portion of it is a nature preserve: a few miles of uninterrupted, undeveloped beach, dunes, and marsh. The beach itself was pancake flat when I was there, and I’d estimate two or three hundred yards from dune to surf at low tide. Because the beach was so flat, the receding tide had left it smooth and packed, and in perfect condition to ride a bike on. In fact, recumbent tricycles can be rented in the closest town, and the only signs of humanity on many stretches of the beach are the lazily zig-zagging curlicues their tires leave behind. Someone also though it would be quite a gas to just go around and around and around in a circle, leaving something not unlike a crop circle out there on the sand.

The island is the kind of place where you can go and see no one. At many times while we were there, the beach was empty ahead of us. Every once in a while a biker would appear, zip past, and the disappear in the distance. I’ve spent a lot of time on the NC coast, mostly up around Emerald Isle and Topsail Island areas, and more recently around Holden Beach. I remember the first few times we went to Emerald Isle, and it was so undeveloped. Some condos here and there, a sprinkling of beach houses. Over the years we watched the area become more popular and more crowded, and the empty space between the houses disappeared. I went back to Emerald Isle a couple of ago, and the current level of beachfront development was a shock in comparison to what I had last seen, which, even at that point, was fairly dense development. So Bird Island was a contrast to all of that. I was only there for a couple of hours, but I think going to a place like this every so often reminds us that beach (or a forest, or a mountain, or a field, or a ________) absent of [others’] human presence is a rare treat, and that treat helps us appreciate better both the partying bustle of a July-4th-packed beach, as well as the nature that was sacrificed to give us our places of retreat, celebration, and camaraderie.

All images from a single roll of expired 120 Portra 160VC, shot on my Bronica SQ. A quick break from blogging about gigs so I can whine a bit about how awful my life is, as clearly shown in the above shot (no, that is not me in the background. I’m behind the camera).

I’m not one who gets sick very often. In fact, I’m quite sure I did not get so much as a cold this past winter (perhaps something to do with not being in a classroom full of students all day). So it really just burns me up that on my first beach vacation of the year, and not even two full days into it, wham-o! Head cold with a vengeance. Throw in a migraine for fun. Had to go on the DayQuil diet, or the store-brand equivalent thereof. Spent the last day of my vacation staring blankly into space wondering how two orange pills could so totally defeat both my cognition and volition.

Sick at the beach. How awful is that? Before my life took a turn for the worse, I was able to snap off a few pretty good shots of my daughter discovering that she is a beach-bum-in-waiting. Her favorite thing to do was just to tear around, going hog-wild. She also really enjoyed picking up a handful of wet sand from over here, running over to there, and then throwing the sand down. The kid knows how to blow through the kilocalories. Which results in epic napping. So maybe it’s not all bad.

I’m on my third cup of tea today. Had to switch over to Sleepytime, so that the NyQuil doesn’t have to have a fight with the caffeine. I wouldn’t want to step between those two when ires are raised. Nepaug Reservoir in Collinsville, CT is just one of those places that makes me want to take pictures. Having a day with interesting light and clouds doesn’t hurt anything, either. Another lovely walk with the family, and a few interesting captures to work on my black and white processing.

Things Are Looking Up Again I think the rules go something like this: keep the sun either over your shoulder or off to the side, use a long focal length, and shoot from slightly above your subjects.

I’ve never like the sun-over-your-shoulder convention. I understand the basic point, but, you know….yech. But I went for the bad-idea trifecta on this shot, using my 24-70 and 29mm (that’s a 43mm equivalent, so technically, a normal focal length), lying on my back on the ground, shooting into the sun. I like it.

These are my two brothers-in-law and my sister-in-law-in-law, and they are in the habit of liking what they call rock band photos…people spread out, looking aloof, being all cool and junk and stuff. I think it all comes together.

D300s, lens as specified above and I don’t feel like retyping it because that would just take up way too much time and space to repeat something you already know, ISO 320 (huh? I have no idea), shutter 1/400s. Lightroom plus some curves in CS4. I waxed poetic about jellyfish yesterday, so to do it again might flirt with overkill.

While the shot from yesterday was all about reds and blues and saturation, I think this one is more about light and translucence. This jellyfish and many others like it were in a tall, columnar tank in the center of the room, and rather than being lit up with a bright color, they weren’t much more than their won outlines and the darkness of the dark room. Just floating along, silent, gooey, flowing. Please watch this first if you are not aware of the dangers of eating the above subject on a sandwich.

I’m not sure what kind of lighting was going on at the Newport Aquarium in Kentucky, but it certainly made these jellyfish look quite the snaz. The room had several tanks with various types of jellyfish, and it was dark and almost as if the jellyfish were glowing from within.

I haven’t always been super-impressed with the D300s once ISO is pushed into the 1600 range, and as I got into this room and got over my first impression of “Holy freaking glowing jellyfish! Ima go and take a thousand pictures now,” I thought I was going t have to jack up the ISO and just deal with the noise.

Turns out glowing jellyfish produce more light than one might think. At ISO 800 and f2.8, I got away with a 1/40 shutter speed, which, at 24mm, was plenty for a sharp shot. Uh…a hundred sharp shots?

Funnily enough, I actually had to desaturate this shot a bit to get it to look good. The red was just a bit too much. 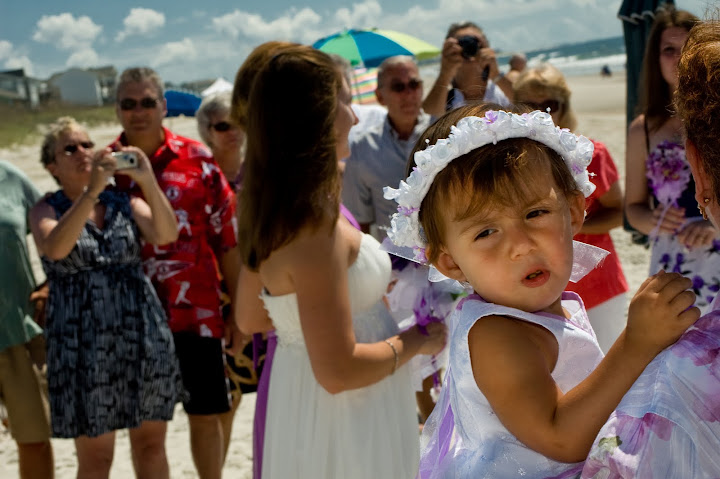 Congratulations to Spencer and Melissa, who got married on the beach on Tuesday. I am increasingly a fan of fun ceremonies like this one…a little (ok, a lot) informal, outside, not such a big to-do, yet everyone is still so into it and is there to celebrate the couple. I’m glad I’ve gotten to know the Josephs through my wife’s family. Great people. 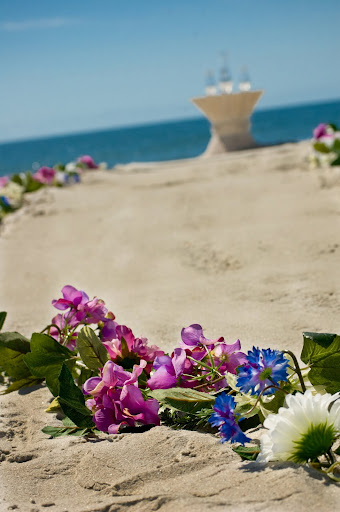 So the official photographer walks up to me just before Melissa walks down from the beach house. She looks at me and says, “You’re shooting what? Oh. A Nikon.” And I’m quite sure she sneers at this point, holding her two Canons out in front of her. Yeah, it’s a Nikon, and not only that, it’s a D40, woman.

But I am able to salvage some self-respect when she pops up her on-board flash as I turn on my very impressive looking speedlight. On-board flash? And you’re sneering at me for using a Nikon? Well now I’m just having a hard time taking you seriously.

Qualification: I haven’t seen her shots. I’m quite sure she is more qualified and able than I am. But I had just as much, fun, and dollars to donuts, I ate more cake than she did. Thanks to the happy couple for letting me practice shooting in blinding mid-day sun. 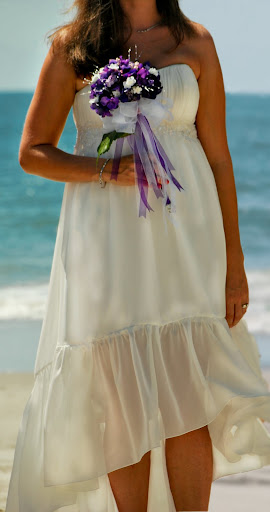 The lens is my 55-200, with a circular polarizer to try to tame the light coming off the sand and water. I think some of these shots are pretty good.

I can’t promise this will be the last of the Ferry Fest Posts.

Some of my favorite shots from last weekend were ones taken in irresponsibly low light. My camera really starts to fall apart at ISO 800, so I should learn to stop; these aren’t the cleanest pictures you’ll ever see me take. But that’s not really the point. Photographs in great light tend to look just that way…great. In low light, I find that I have to search more for what to shoot…just the right moment, or an expression that can be implied by a few simple lines.

So whether it is light cast from a glow-stick… 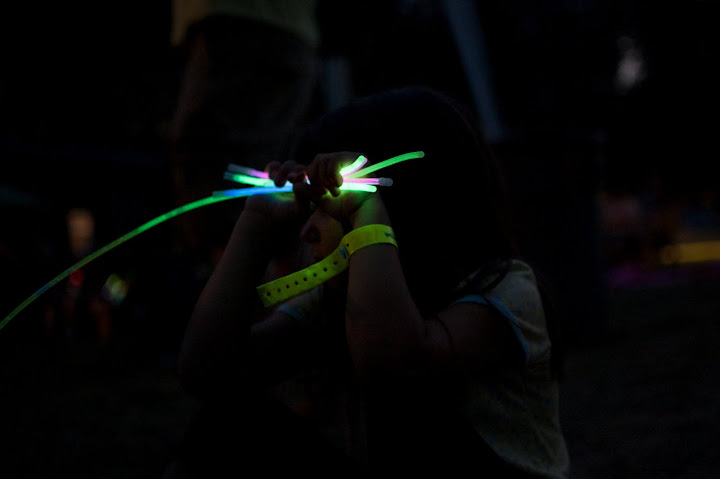 or the the glow from a fire… 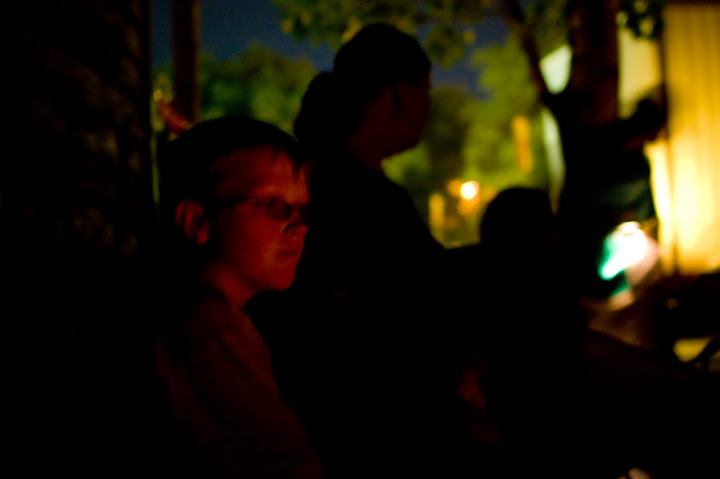 or the outline of a wife… 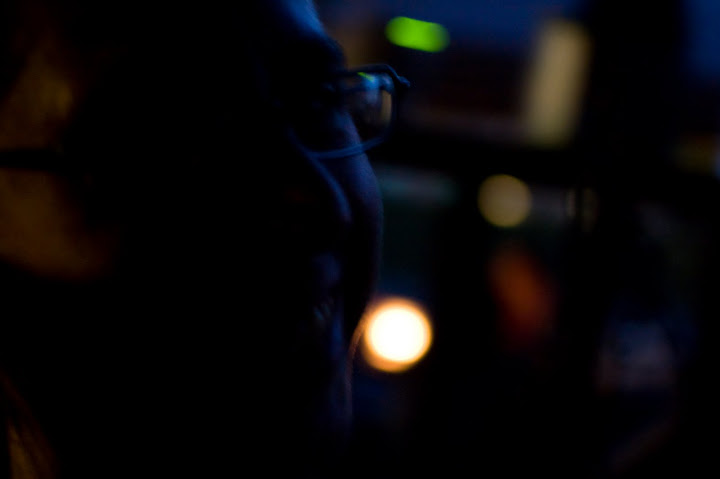 or gettin’ down in the second-hand light of the stage… 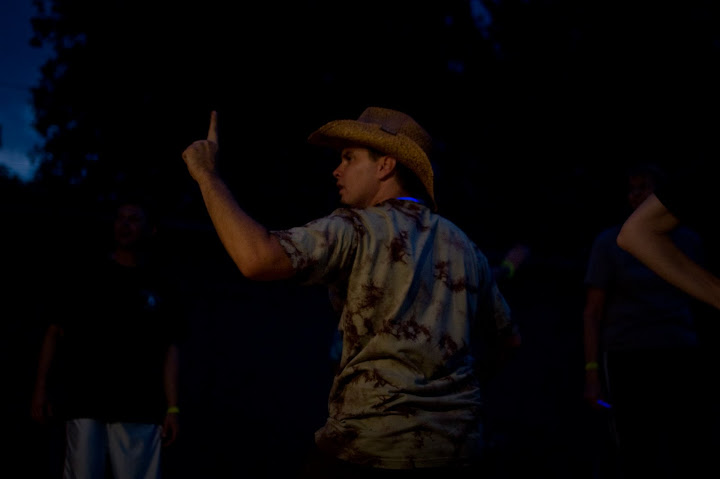 I think these are more memorable, and more fun, than shots of cute kids in good light (not to disparage). 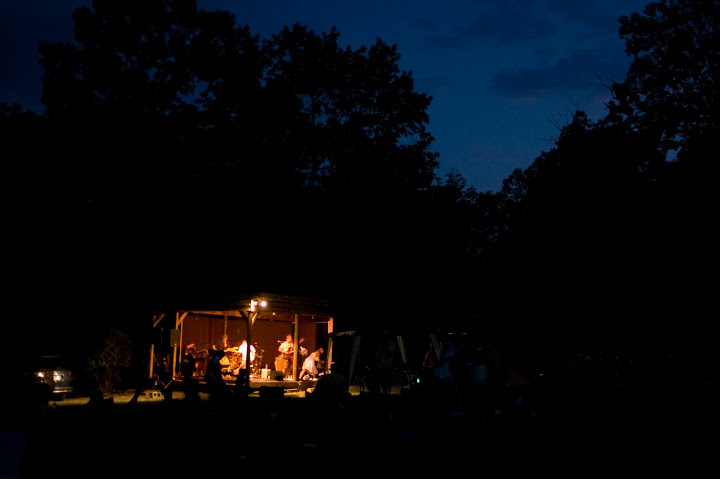